I write about my experience in arbitrating my first chess tournament. (I highly recommend reading my previous post “A Chess Arbiter’s Course” before reading this post)

After passing the Chess Arbiter’s Course, I became a licensed Level 1 ECF (English Chess Federation) arbiter. My next goal was to reach Level 2. Level 2 basically means that you’re qualified to be an arbiter on your own. In order to reach Level 2, one must arbitrate at 3 separate chess tournaments which have an assessor. The assessor (as the name implies) assesses your performance and can give you a “tournament norm” which is basically a statement saying that you have performed well as an arbiter.

The big day finally arrives. It’s time to arbitrate my first ever chess tournament. I wake up nice and early, then view over my notes from the chess arbiter’s course whilst I eat breakfast.

I put on my grey suit and my polished work shoes and take a quick glance in the mirror before departing to the tournament venue. I feel a wave of nostalgia - the last time I wore this outfit was back in Sixth Form. I feel nervous, yet confident in my ability to make judgements.

I arrive at the tournament venue at the arranged meeting time of 9:00AM. My fellow arbiter, that is also planning to be assessed also arrives and we start by setting up the playing venue. After some time, the chief arbiter (which is also our assessor) arrives, with a plethora of chess equipment. Enough chess boards to accommodate for 250 players, 5 electronic live boards, four suitcases of chess clocks and four large bags of chess pieces. Not to mention a huge shopping bag of various cables, cable connectors, two laptops and a printer. On top of all of this, they were wearing the most flamboyant jacket, coloured in red, white and blue with the ECF chess logo embroidered on the side pocket.

At precisely 10:30AM, we finish setting up the rooms for the tournament, lay out the result sheets, check that the chess clocks are in order and ensure everything is ready to go. The chief arbiter announces the pairings for the first round and I prepare for the challenge of applying what I’ve learned from the arbiter’s course in a real tournament situation.

In order to be assessed, the assessor has to fill out an assessment form, which basically states how well I performed over the course of the tournament. Varying points are taken into account in order to assess performance, such as how well an arbiter makes decisions in various situations, how well the arbiter strives to achieve optimal playing conditions for the players and how accurately the arbiter can record game results and produce pairings for each round in the tournament. These points are then added up and a score out of 16 is produced, where 13 or more is required to pass.

During the third round of the tournament, my first call of duty arrives - a young player raises their hand. I walk over to the players and perform the usual protocol that an arbiter must adhere to for such a situation, which basically consists of checking that the clock is paused and prepare to figure out what the issue is. It so happens that in this situation, the opponent played an illegal move, in particular, they didn’t realise they were in check and played a move that didn’t get them out of check. I explain the situation to the opponent and state that the penalty for such a move is that the other player receives an additional 2 minutes on their clock, and that if another illegal move were to occur, that would instantly cause them the loss of the game.

Now, adding 2 minutes onto a clock should be a simple task, and indeed, I learned this in the arbiter’s course. When the clock is paused, enter the clock “edit” mode by holding down the pause button and then change the minute timer by 2 minutes. No problem. It just so happens that adding 20 minutes is also insanely similar to adding 2 minutes. After having a mini panic when I realise that I added 20 minutes to the clock instead of 2 minutes, I made sure to correct the issue (whilst still looking as if I know exactly what I’m doing) and resumed the clock for the players.

At the end of the third round, the assessor comes up to me and I discuss what I did and he decides to question me on one of the pairings on the pairings board.

So, look at this line here. This player is paired with this player. Why?

I stare at the board in complete bemusement. There are so many numbers I could not make heads or tails of it. Gradings, ratings, board numbers and player numbers. I honestly answer the question with “I haven’t the foggiest idea”, to which the assessor explains the pairings and states that they’ll come back to question me once again… with a much more difficult pairing question.

At the beginning of round four, I have lots of time to stare at the board and prepare myself for everything that the assessor plans to throw at me. I remember how the pairing system works and feel confident for the harder pairings question he plans to give me. I deal with two more cases of illegal moves - one of them occurring whilst the assessor was in the room. Towards the end of round four, the assessor gives me a small tally counter: 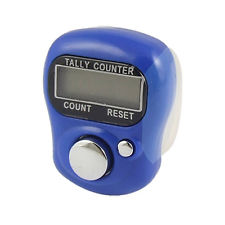 I have this tally counter. Why?

It so happens that when I went over the things an arbiter needs for a tournament, a tally counter was indeed something on that list. Unfortunately, I have no answer to the assessor’s question and they give it to me and tell me to think about it. I ponder for what seems like ages - “what on Earth could I possibly need to count?”. Was it the number of moves a player has made? No, it couldn’t be - they record that on their own score sheets. Could it be the time left on a clock? No, that’s silly - the clock keeps track of the time. The grades each player has? The number of times a player has made an illegal move? The number of states a player has reached in the event that they reach a draw by repetition state? After conversing with the assessor, it so happens that the tally counter is required to keep track of a draw by 50 moves.

At the end of round four, I swap rooms with my peer so that I am in the room with the assessor. We discuss how the open tournaments tend to have significantly less work for an arbiter as players generally make much less mistakes. We discuss the concept of live boards which are electronic boards that are connected to a computer and keep track of the moves that players make. They’re also very sophisticated and can connect to the internet to host the games live, as well as provide helpful tools for arbiters to point out draws by repetition or 50 move draws. The assessor teaches me a little about the “fancy clocks” that are used with the live boards. These are none other than the DGT 3000 - the most advanced chess clock in the world.

The assessor allows me to input results into the software which is used to create pairings - the Swiss Manager. It is actually a lot simpler to use than I anticipated. You clock on the name and you give them the score. Simple as that. I end up keeping track of the results and ensuring that the live board results are properly updated and respond to the few on-the-spot questions that the assessor gave me with perfect answers. The questions included:

When it was nearing the end of the chess games, I recommended you look at board 7 rather than board 4. Why?

Surprise surprise, board 7 is a regular board whereas board 4 is a live board. There’s no point spending all of your time paying attention to a digital board because it’s already keeping track of everything!

To keep track of the results, I’ve arranged the result slips into these various piles. Why?

It’s a lot easier to keep track of what result slips have been collected if they’re in little piles, rather than one large pile.

Considering it is now round 5, these are the pairings. Why?

Since it’s far into the tournament, some players may have played each other before. The pairing system cannot allow two players to play each other more than once!

The tournament reaches the end. All of the players receive their prizes and we pack everything away. All that remains is for the assessor to add up the marks and for them to inform me whether I pass or whether I fail. They were very thorough and explain everything about the assessment setup and go through the results in the utmost detail. I was able to look professional. I was visible to all players and was available when they needed me. I was not biased towards players. I worked well with the other arbiters. I made informed decisions and I was able to explain the pairings that were conjured up by the Swiss Manager.

I only fell short of one point: “Effort is made to minimise the noise and distractions in areas immediately outside the playing area.” We discuss this point together and both agree that the assessor was right in not awarding me this mark. Overall, I manage to pass the assessment and receive my first tournament norm. With one in the bag with some feedback on where to improve, I feel confident that I can arbitrate my next chess tournament to the best of my ability.