Today I cover a few more features that exist in Java that most intermediate Java developers don’t know about. Similarly to part 1, we cover features that may not be useful in day-to-day programming, but are useful to know in the Java language. We will cover final classes and methods, anonymous subclass implementations and the double brace initialization.

In this tutorial, we will cover:

Compared to part 1, this tutorial requires a little bit more knowledge of the Java language. I’ll assume that:

The final keyword is a rather simple and heavily underused keyword in Java which has similar properties to const in C/C++ and val in most modern programming languages such as Kotlin - it simply prevents a variable from being changed once declared1. An example of the final keyword for variables is shown below:

This final keyword ensures that variables are not modified which can be used to better reason about the code and prevent accidentally changing a value. However, the final keyword is not merely restricted to variables. Java lets you put the final keyword on class and method declarations which gives classes protection against subclassing and gives methods protection from being overridden.

By adding the final keyword to a class, this prevents that class from being subclassed. This means that you cannot make a class which extends the final class. To illustrate this, let’s look at an example of a simple final class:

This simple class stores an integer value which can be created using the IntWrapper constructor and the value of the integer can be retrieved using the getValue() method. Say we wanted to create a subclass of this class that includes a setter method:

This results in a compilation error because the class IntWrapper is final. Using the final keyword means cannot be subclassed, so using the extends keyword will not work.

Contrary to popular belief, making a class final does not mean that the class is immutable - a final class can do everything that a non-final class can do, it just means it cannot be subclassed.

Since the class IntWrapper is not final, it can be subclassed as normal, however overriding the definition of getValue() will now result in a compilation failure.

An anonymous subclass, also known as an anonymous class, is a class which has no name. They are often used to provide a specific instance of a class which is determinable at runtime, or when having a full class definition would be unnecessary. To create an anonymous subclass, you call the constructor to the parent class that you want to extend and then open a pair of braces. Within these braces, you are free to write your implementation of this class.

An example of an anonymous subclass

Since the concept is a little odd when written in words, let’s work through an example. Say we have our favourite example, IntWrapper:

Let’s also have some arbitrary function in some other part of our code which contains an anonymous class to IntWrapper:

Say we wanted an instance of IntWrapper that when you call getValue(), it returns the square of the number that it is storing. To do this in a normal subclass, we would have to override the getValue() method and write our implementation. This method still remains the same, except instead we write it within our braces:

Now we’ve basically created a custom implementation of IntWrapper which when you call getValue(), it returns the square of the number it is storing. Since this is still a subclass, you cannot create an anonymous class of a final class.

For example, the Runnable interface contains a method run(). To create an instance of a runnable, you can use the method above of using the new keyword, followed by the name of the interface Runnable, and then an implementation in a pair of braces that implements the run() method:

Uses of anonymous subclasses ‘in the real world’

In Java programs that are commonly used ‘in the real world’, anonymous subclasses and anonymous interface implementations are often used to create simple implementations of classes that serve a single function that is often only used once in some code, thus being excessive to create its own class.

A common example of using anonymous interface implementations is for GUI action events. For example, if you wanted to run some code when a specific key is pressed in a text area, you can use an anonymous implementation of the KeyListener interface:

The last important thing to cover with anonymous subclasses is how they handle generics. In general, the generic type of the anonymous subclass must be explicitly stated, meaning that using the so called “diamond operator” <> that was included in Java 7 cannot be used.

This following topic refers to the anti-pattern double brace initialization. It is heavily inefficient in both time and memory performance and it is recommended to avoid using whenever possible. Nonetheless, we will still cover how it works and why it is so inefficient.

An example of double brace initialization

In this example, I show how double brace initialization is used. We use two pairs of double braces to initialize the contents of a List in Java:

Because we are in the constructor for the class ArrayList, we have access to all of the methods in ArrayList that we normally can access through subclassing. Hence, we can take advantage of the add() method to add elements directly to the list upon creating an instance of this object.

The problems with double brace initialization

Double brace initialization is heavily regarded as an anti-pattern for the two following reasons:

It creates an additional class every time you use it

It can lead to memory leaks

Double brace initialization generally leads to memory leaks. What this means is that the anonymous subclass that you create also includes a synthetic field which references the parent object. This is because double brace initialization can refer to private methods and (final) variables from the parent class in which this subclass was declared. To illustrate this, let’s walk through an example:

Say we have a class ParentClass which includes a method that creates a list using double brace initialization, and also includes a private field containing a very important array (veryImportantArray).

When calling the function listOf5(), the resulting list will include a reference to the class ParentClass, which will include (in our example) veryImportantArray: 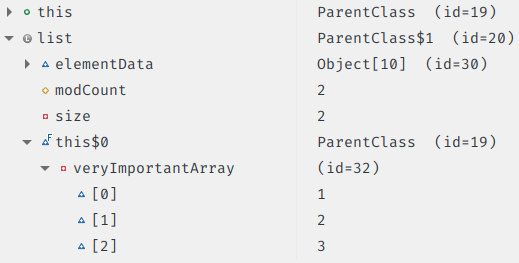 Now, using reflection, it is possible for someone to retrieve the instance of the class ParentClass and thus, access our very important array - a clear security flaw. If say, our “very important array” is an incredibly large object (memory wise), the list created using double brace initialization will also include a reference to this large object which cannot be garbage collected by the garbage collector, since it is referenced by this list.