This blog post contains spoilers for the video game Hollow Knight. If you don’t want to be spoiled by some extra lore relating to the origins of the story, I’d recommend you don’t read this post.

Hollow Knight is a video game by Team Cherry about a large kingdom called Hallownest. Due to an infection, most of the population is dead and the kingdom is now in ruins. The player must explore this ancient land to uncover the secrets of this mysterious land. This game is an amazing exploration game, similar to Legend of Zelda: Breath of the Wilds, in the sense that you are free to explore the city to your satisfaction and gain small and subtle abilities, and health upgrades (as opposed to having to grind for levels as with other video games).

Within the White Palace, there is a secret hidden location called the Path of Pain, which contains a tablet with the following text:

To witness secrets sealed, one must endure the harshest punishment.

Sure thing. I wanna know what secrets area sealed, let’s give this thing a go. I’ve beaten the World’s Hardest Game, along with World’s Hardest Game 2. I’ve fought the final boss of Hollow Knight. I’ve beaten the Grandmaster Galaxy from Super Mario Galaxy 2. I’ve done it all, there’s nothing I cannot do. I’m not going to be put off by some simple scripture stating how difficult the upcoming level would be.

It’s 12am. Surely I could complete this in about half an hour and get an early night for once. How very, very wrong I was. This ordeal never ends. I feel myself physically ageing as I continue to die, again and again. I don’t let the failures get to me, I make sure to remain calm. I take rest breaks as I need them to maintain my composure, before attempting to tackle the problem at hand.

I have compiled a compilation of myself dying countlessly - every single time the player touches a spike, thorns or a spinning saw, they respawn at the last “safe location”. The Path of Pain has very few safe locations. The amount of deaths in the video shown is about 20% of the overall deaths that occurred during my attempt.

It’s 3am. I have been ploughing through endless losses endlessly. Even I have to rest my body and put my mind at ease. It’s definitely time to go to bed. I bring up the pause menu. It displays a simple prompt: 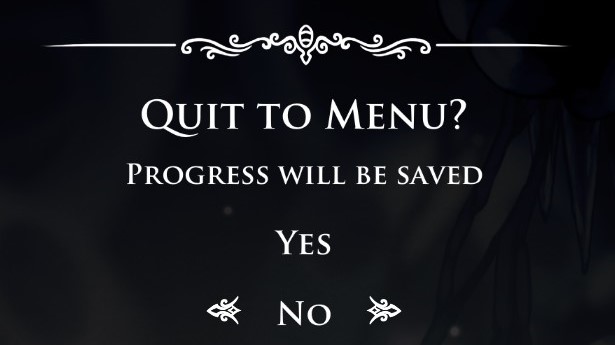 The following afternoon, I launch Hollow Knight only to realise that it did not save the location I reached. It saved the last checkpoint I had arrived at. Where was that checkpoint? At the very very beginning.

Despite the insane setback, I continue forwards. Yeah, the road ahead is going to be a tough one again, however I have made significant progress. Not only did I open a door which allows me to skip a portion of the challenge, I have gained the experience of the previous areas and should be able to breeze through them with no problem. Given that I am able to tweak my abilities, I do so in order to aid the challenges which I will be facing again (for example, having a longer reach weapon to supply more room for error when hitting enemies/obstacles). I present to you, my completed run, from start to finish:

Indeed. This was the harshest punishment I’ve endured in a very long time. I have spent over 4 hours on this trial. Nonetheless, it’s an achievement I’d like to share.