I wrote a bookmarklet to help with one of the most annoying YouTube issues - deleted videos in a playlist.

By far, the most annoying thing you can cross on a daily basis is when you pull up your favourite YouTube playlist, only to be greeted with the following horrific sight:

A deleted video! Not only do you no longer get to view that amazing video you saved in your playlist again, you have no clue what the video title was so you can look for another source elsewhere. Even the thumbnail is gone so all possible clues to track it down are lost!

To combat this issue, I created a bookmarklet to help identify those missing videos. I discovered that even though YouTube videos are deleted, their ID still remains in the link to the video. By searching for this ID on Google, it helps retrieve information about said deleted video.

The bookmarklet, which I call the Video Salvager is pretty simple - it finds the video ID from the playlist page and produces links to Google searches. It then displays this in a lovely little dialog box. Simple, yet effective and at least it’s better than the alternatives (looking through developer tools for ages to find the ID, or ignoring the video and wondering what content you’re missing out on). 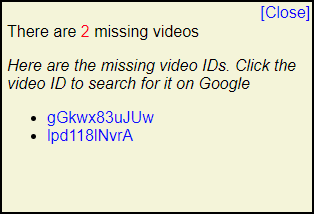 I have included the source code on GitHubGist (including comments!) for those who are interested in how it works.

Unfortunately, although useful, this bookmarklet does not work with certain YouTube playlists, in particular, the Watch Later playlist. This is because YouTube decides that instead of leaving deleted videos in the playlist, it just straight up removes it, with the following message: “One or more videos have been removed from the playlist because they were deleted from YouTube.”